Monaco, a safe haven for investors

Health crisis, inflation, global warming, the Principality of Monaco, like its European neighbors, is not spared. However, the latest reports from the Monegasque State show that the country's economy is doing well and that the future is viewed with optimism. In this article, Petrini Exclusive Real Estate Monaco deciphers for you the challenges and opportunities of tomorrow.

The Monegasque economy in 2022

Situation of the Monegasque economy

Minister of State Pierre Dartout presented the initial 2022 budget at the end of 2021. The figures for the coming year are optimistic and ambitious, said the Minister of State. Indeed, the unexpected economic recovery in the third quarter of 2021 allowed the State accounts to return to the green. Thus, the 2022 budget amounts to almost 1.9 billion euros, i.e. an increase in expenditure of 7.1% compared to the previous year. These expenditures aim to maintain and solidify the Monegasque economy for the coming year, while adapting to changes in society.

In 2022, the State is counting on an economic recovery focused on transition and digital security, to seize the related opportunities. The Principality has understood very well the issues related to digital technology in an increasingly connected world. These investments will make it possible to strengthen the attractiveness of the territory and to establish the competitiveness of its economy.

Health of the real estate sector in the Principality

The Principality's real estate projects contribute greatly to the increase in expenditure planned for 2022. Indeed, according to the report by the Monegasque Institute of Statistics and Economic Studies (IMSEE), Monegasque real estate is breaking records in 2021.

Thus, the amount of sales and resales amounts respectively to 235.6 million euros and 2 billion euros. These figures have a direct impact on real estate VAT receipts, which will reach 129 million euros in 2021.

The figures therefore attest to the more than satisfactory state of the real estate sector in the Principality.

New constructions in progress and to come

This building comprising 66 apartments is located at the entrance to Monaco, in the Jardin Exotique district. The residence, bordered by abundant tropical vegetation, enjoys an unobstructed view of the sea and the Principality. In addition, many high-end services are offered to residents of L'Exotique. Among these services, there is an indoor swimming pool, a hammam, a sauna, as well as a gym. [Read more]

It is a private investor, Renato Mazzolini, who is at the origin of the Le Luciana project. This private building is located in the Condamine district, at numbers 3 and 5 Avenue J.F Kennedy.

In addition to the ten apartments located on the upper floors, the building also houses shops and office space. Indeed, Renato Mazzolini cedes square meters of space to the State, in particular to the Bus Company and the Town Hall, which also owned shares of the land. As a result, the site is entirely the responsibility of its owner, from design to financing and up to the construction of the new building. [Read more]

45G is a new sixteen-storey building, enjoying an ideal location in the Principality. Indeed, it is located in the lively and commercial district of La Condamine, a stone's throw from Port Hercule. This luxury residence has 72 apartments with contemporary design and quality materials, including two penthouses with swimming pool. The building with white stone coverings and large balconies enjoys an ideal southern exposure. [Read more]

This project, which began in 2017, is located in the Larvotto district and extends from Boulevard d'Italie to Avenue Princesse Grace. With a surface area of ​​150,000m² and two huge residential towers of 25 and 30 floors, the Testimonio II is a major achievement. In addition to housing, this complex also houses the International School of Monaco, a 50-crib nursery, as well as a 1,100-space car park.[Read more]

Metamorphosis of the Café de Paris

In the Principality, real estate projects are not only residential. Indeed, many projects aim to improve existing buildings and should see the light of day in the coming years.

Among these improvements, the Société des Bains de Mer (SBM) announced at the end of 2021 the renovation of the legendary Café de Paris. The images of the project estimated at 40 million euros were recently revealed by the president-delegate of the SBM, Jean-Luc Biamonti, during a press conference. The new building will cover a total of 14,000 square meters including several terraces, the mythical Café de Paris brasserie, the Amazónico restaurant as well as new shops never before seen in the Principality.

Despite the various events, both health and political, of recent times, the Monegasque economy is doing well. Thus, the Principality always wants to be more dynamic and connected, and the opening of new establishments demonstrates this perfectly. Among these new establishments are restaurants such as the Trinity Irish Bar or the Pavyllon Monte-Carlo, but also larger projects.

As an extension of the offshore extension, the Ni Box leisure center will be replaced by a building more in keeping with the neighborhood. The Neuehouse concept combines work, conviviality and cultural events in one place. There are already several sites of this type in large cities such as New York or Los Angeles. In the Principality, Neuehouse has, among other things, an event space, an amphitheater, two levels dedicated to offices and coworking spaces, and a restaurant on the roof terrace.

On the other hand, the architecture of this building will be aesthetically more consistent with the new district of Mareterra. The first images of the project indicate that abundant vegetation will conceal the expressway from Mareterra. In addition, in the continuity of the extension at sea, the construction will meet sustainable certifications.

Cala del Forte, the third port of the Principality

The saturation of the two ports of the Principality, the Port of Fontvieille and the Port Hercule, is at the origin of the Cala del Forte expansion project. This third Monegasque marina located in Ventimiglia has 178 berths, operated by the Société des ports de Monaco.

This new port is a model in terms of sustainable port management, ecological responsibility and safety. In addition, Cala del Forte is perfectly equipped and offers a range of top-of-the-range services, just like the Principality. Among these services, a maritime shuttle bearing the name of Monaco One connects Port Hercule to the port of Ventimiglia.

After the modernization of the Larvotto and the Exotic Garden, it will soon be the Fontvieille district's turn to experience an impressive metamorphosis. Entirely built on the sea towards the end of the 1960s, this business district will undergo a real restructuring in the years to come.

Indeed, the current Fontvieille shopping center built in the 90s will be replaced by a new five-storey building by 2027. This will include 70 to 80 shops, a cinema, a park, restaurants, as well as dwellings. 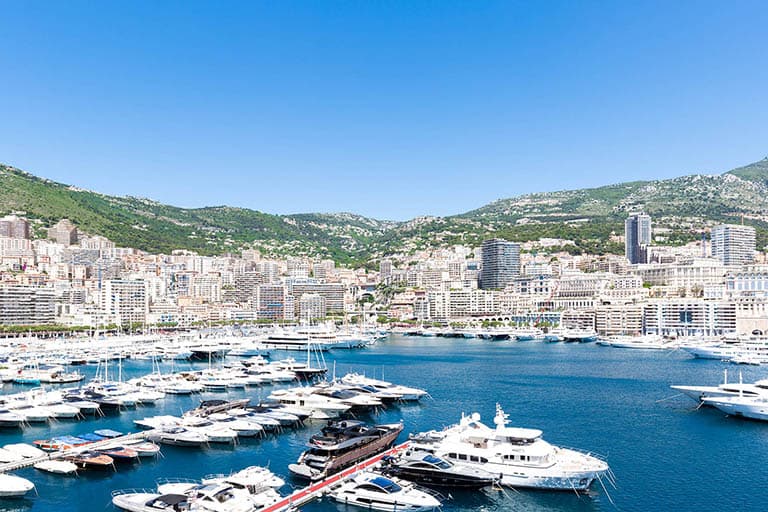